Can someone who is knowledgeable about such things give me a brief summary of what is the difference between the Sensor.Community (airRuhr) kits, the Nettigo STD kits, and the Nettigo PRO kits, other than the obvious price difference! All available on the Nettigo shop. I get that there is some duplication of things because of the shortage of the BME280 sensor and alternative kits being made available but I’ve struggled to get a real clue as to the difference between the various types and it’s a bit confusing.

Context: I’ve recently invested in Ecowitt weather station and recently added their AirQuality sensor, and I’m about to start fettling with FOShk-plugin and maybe weewx to be able to publish that AQI data more widely, but could also invest in project equipment like Sensor.Community / Nettigo - the only other one I’m really looking at is Gaia (Gaia Air Quality Monitors - Product Series)

In the airrohr the PM sensor is installed in an open pipe (protecting against wind & rain). The Nettigo air monitors “NAM” (STD and PRO) have a different housing and feature a heating element, which is supposed to reduce the effect of high humidity. The difference between STD and PRO is that the STD has a Wifi antenna directly on the esp8266 board, whereas the PRO has an external WiFi antenna. The NAMs run their own firmware, which afaik has its roots in the airrohr firmware but is developed by different folks.

Great, thanks for the insight. I thought the difference were something like that but I couldn’t find a succinct descripton of the difference.

For anyone that uses the Nettigo kits, if you can stand in the proposed install location and get a decent Wifi signal on your phone, I assume the internal Wifi antenna is sufficient.

Also, acknowledging that this is the Sensor.Community forum, and I’m asking question about related but competing solutions, is there any perceived negatives with going with the Nettigo kit and their fork of the firmware against the native project software?

Hello @nephilim , @plunet ,
I just installed what I think is an AirRohr kit (am I right?), bought from Nettigo, which is this one, announced on Nettigo as a replacement for the original kit which is not available because of a shortage on pressure sensors.
This is my first kit and I’m quite proud as everything works fine, apart of course the absent P measurement.

Now I have a second location I’d like to kit, and I found on Netigo they do have P sensors, but only within some larger kits, like that one, which strongly resembles mine but with a different casing and various extra niceties, like an external wifi antenna, a heater associated to the PM which is expected to alleviate humidity impact on the particles, and apparently an extra red sensor that I don’t recognize for the moment.
It is however called a Nettigo monitor rather than AirRohr (plus it seems to be preset in polish language and with Polish-only assembly instructions

→ Do I understand correctly that, once installed, it’ll connect properly to the same community network?
And is there an experience here with this kit?
(e.g. can someone confirm that If I manage to input my local wifi netwwork on the Polish interface then I’ll reach a panel offering the possibility to switch to english?)

(I searched for alternate suppliers too, but disagree with the Gaia way of renting-only, and the only other third-party I found was a German company that seems to only deliver to German locations…)

I have a NAM kit but with BME280 and SHT35. I can assure you that it will send data to madavi, the sensor.community map and your local influxdb just like the airrohr. It’s funny that the soldering instructions are also available in English but the final assembly is not. However, you can always use google translate. Also for the interface, such that you can switch it to English. If you struggle, I can send you a screenshot, where in the configuration the language is set.

My experience… I can see that the heating element is working at high humidity. But that data is difficult to judge, because all of the SDS11 I have tested after getting my airrohr in the first place read significantly lower. The first batch was reading about half of the SDS I bought for my airrohr. The batch I got a few weeks ago is “just” 30-40% lower. Once I get a proper SDS I can start looking at the differences between the airrohr and NAM concepts.

As far as I can understand things, available for purchase at Nettigo as of Sep 2021 are:

I think I have got all of the above right.
Apparently it’s easy enough to change the firmware from Polish to English (or vice-versa) after initial basic configuration - for example the updated Pro and Pro Soldered only currently have a Polish version at the moment.

The slight differce there is in the way the various kits are described makes it very difficult to work out what the total list of options are and what is available so assuming the above is correct hopefully this is useful.

EDIT: updated to include some corrections and bulleted list of key components

I think I am probably going towards getting the Nettigo rather than the Sensor-Community unit.

Having a heated sensor to minimise the risk of false high readings on days when it’s misty or foggy I think is worth having.

And for the sake of an additional €5 for the option of the wemosD1mini being upgraded to the PRO which supports the external antenna if you need it and has 16M of onboard flash compared to 4M is worth having in case I want to do anything else at a later date.

I agree that it’s a little odd that the final assembly instructions do not appear to have an Englsh page but I doubt that google translate is going to struggle to give me enough of a clue on how to put the unit together when it includes pictures.

Feliciations a @Herve5 for getting your AirRohr kit assembled - you’re ahead of me. Hopefully my previous posting helps decode the options that are available, but if you’re looking at the Nettigo Pro like me it seems it’s currently only available in polish firmware, but hopefully easy to change.

Thank you, @nephilim , @plunet !
Indeed the choice for me, for my second location, is between

I have to make up my mind today as I want to order and receive it before I move to Paris, in 10 days

I’ll keep you informed, specially if I get to work from the Polish how-to!
Thank you again,
H.

ordered, today, the second one…

I just received the second one here in Paris this morning. Now I’m facing the terrible perspective of assembling it with only incomplete Polish how-tos

Hi Tomo,
You have written great summary. I’ll try to add some clarifications.

KIT-2132 is the same sensors like KIT-2113. Standard jumper wires are replaced by harness cable with XH connectors. That means connection is sturdy (no more random disconnections) and easier to build - each connector is different, so there is only one place where it can be plug-in: 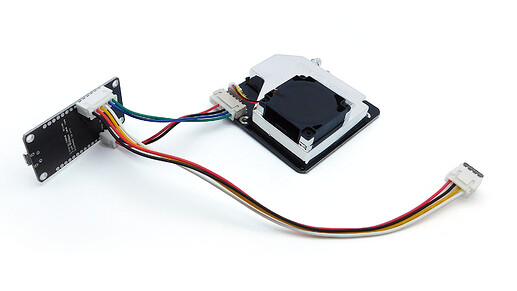 NAM runs different firmware than SC, it sends data to SC API by default. You could use SC software, but AFAIK heating chamber won’t be supported. Currently NAMF (NAM firmware) is only in English, Polish and Hungarian.

I think that are main differences between these kits.

BME280 have started to show for order in China again. The problem is that theirs price went up over 100% So kits with BME will cost more (something like ~7 EUR more).