Is there a circuit diagram available for the SDS011 sensor like the one for PPDns given here?

I have a number of broken SDS011. Some of them are known to be broken by reversing + and -. Maybe it is possible to fix them easily?

Haven’t found a schematic but the MCU appears to be a STM32F038K6 so power might not be connected directly to the MCU,

Have to take down a sensor today so will have a look at the power supply side of things if I get a chance.

Found this interesting information with some internals:

This is for the plant power device but it gives an idea, it’s probably the power regulation that’s blown as he said he’s repaired one by replacing a low dropout regulator.

U24 marked DK7y is a LDO and probably what has given out the magic smoke. 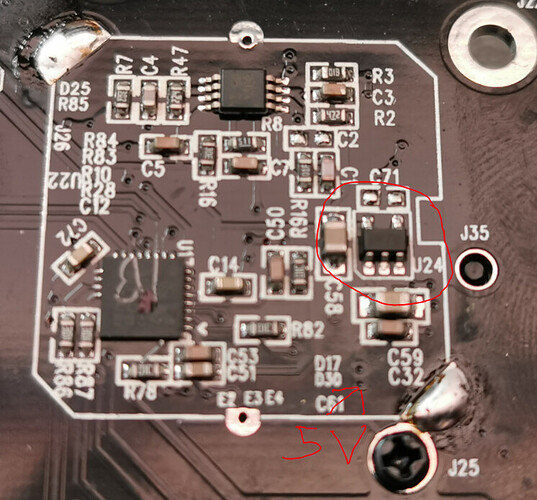 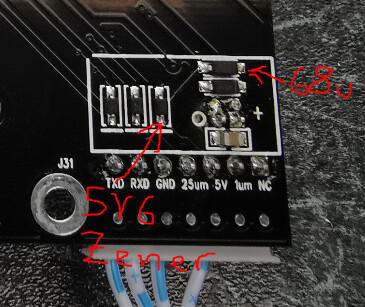 When one of my SDS011s or someone can supply a dead SDS011m I’ll have a go at doing a full reverse engineering.

I don’t think this is a capacitor

There are two components I have problem with identifying:

You will find there BOM, IC datasheets, photos and additional resources.

I would like to measure exact values of all capacitors and identify all components. Than I will draw schematics in EasyEDA, and design prototype PCB. I will add some new features to this board - like ability to flash own firmware.

With deep understanding of construction and proper schematics repairing broken SDS011 should be easy. Also we could experiment with improving this device. And maybe in future NovaFitness would like to talk with us - right now (despite of selling thousands of theirs sensors) they treat us like idiots. Which is unfortunate.

There is one guy in our local community who is doing quite the same work. Forwarded information to him. Hope he will manage to register on the forum and add something valuable.

13F6 is the same across different years.

I tried to reverse old one. In that device V2-008 they use OA TI OPA2376 and LDO TX6211B.
TLV2376 seems almost same characteristics.
Also draw some schematic in EasyEDA for it and measure signals after first stage TIA and second stage amplifier, there are very noisy with 100 mV needles with 5 ms period, I think because they didn’t use rc-filter and signal buffer before STM’s ADC.

I wounder is it possible to load new firmware to STM processor over standard connection of SDS? Or it must be done via connector pad located on the PCB?

The biggest drawback of the closed source FW is that you don’t know how it works. If the measurements are raw one or some sort of a math model… If it could be “opened” then there will be more information…

Also draw some schematic in EasyEDA

This is exactly what I want to do. I will also replicate PCB to make a open source version with experiments in mind.

I didn’t got any readings on C1 capacitor.

Do you want make a better one sensor or fully compatible board?

Do you want make a better one sensor or fully compatible board?

I always want to push designs to it’s limits. Understanding design is one thing, improving another. I would like to try write own firmware for SDS011.

So I don’t think we know exact part number and manufacturer of this LDO.

In my device there are 3.3V “DE=A1D”, and I think this part is not very important.
Most important to understand is there any calculations with amplitude of impulses or stupid counting impulses above some level at first and second stages of amplifier and produce pm10 and pm2.5 respectively.
But stm could work from 2.0 to 3.6 volts, OpAmp too, main question is laser and how it works from different voltages.

Perfect! I will put TX6211B in schematics. I think I will read a datasheet to be sure that this part is not very important and may be swapped for another with similar characteristics.

Most important to understand is there any calculations with amplitude of impulses or stupid counting impulses above some level at first and second stages of amplifier and produce pm10 and pm2.5 respectively.

So basically it looks like poor and noisy design which works only because of proper calibration.