Hi everyone,
the fan of my sensor (type Sensor Community) started to get louder and louder and I’m afraid it is goind to break. Is there a simple way to replace or fix it? The sensor was used a small number of days (<100), and always indoor, with generally very low dust levels, so I’d expect it to be worthwhile fixing.
Thanks

Hi Alecs1,
We too have the same issue with one of our fans. Ours are outside and have been running for nearly 11 months so it is perhaps at the end of its lifetime (I hope not). We have turned this one off because we were concerned that our neighbours would complain! We did clean the sensors but it doesn’t seem to have helped. I hope someone can help.

I have finally opened it and there is not a single particle of dust I could observe on the fan blades or elsewhere. The fan is no longer properly fixed on its bearing (or bushing or whatever system it uses) and thus just moves around depending on position. This SDS011 fan has to be the crappiest of crappy fans for failing so early. I’ve had laptops older that 10 years totalling over 20000 hours of serious load, never cleaning the fan and without a failure, and this thing fails after a few hours at low loads.

I’ve adjusted it’s position to make less noise and I’ll look to improvise some replacement fan when it completely fails. I’ll post pictures when I do it.

How did you get into the fan? I wasn’t sure you could open it up. It is possible that the fan is operating at a faster speed and more often than a computer fan so it might not be a fair comparison. I would need to check to confirm if this is the case. I have concerns that making changes to the fan will affect the performance of the particle counter and it might need a new “calibration”. That said, the fact that the fans have become noisy suggests that they are probably performing differently than the factory setting anyway. One thing is certain these systems are not particularly long lived and sadly, the idea that they are low cost might be misleading. Our small group has had a number of problems over the past 12 months.

The comparison is not unfair, SDS fan is a lot slower than the ones in work laptops which move a lot of air and make the noise of small airplanes for many hours a day :))

And I agree, almost certainly changing the fan will change the volume of air that the particle counter inspects and change the results. I’m not sure what the solution would be: a) I capture the exit air in a small plastic bag and estimate its volume then somehow adjust the new fan, b) just use the sensor in a relative way: „the air has twice as many PM1 as yesterday”

Forgot: I just removed all the screws I’ve seen, I didn’t look inside the bearing, as I don’t think these things are serviceable at all.

Thank you for the reply. My second device has now started to have issues. So 12 months looks like their limit! I shall be taking both apart now.
Like you I am now looking for viable alternatives but full systems I think.
As for calibration …that isn’t easy as there are too many variables to be accurate. I have considered looking at known concentrations of reference particles (eg polystyrene latex spheres) but really it should be done in an aerosol chamber. So calibrating relative to another particle counter is as good as it gets. Ideally this should be relative to a fully calibrated system. Do you know what flow is needed? We think it should be about 0.5 l/min

Interesting discussion. I think the speed of the fan, or, in other words, the amount of flow passing through the measuring chamber with the laser and photo diode, does NOT affect the results of the measurement. There wil always be the same amount of particles in the chamber, whether they are whizzing past or flowing at a leisurely pace. So replacing the fan should not give any calibration worries.

We have the same problem in our city with 130 fine dust meters. So far we have 15 meters of which the fan of the SDS011 makes a lot of noise. We have made this known to our supplier. They come back with the answer that we have mounted the sds011 vertically and that according to the instructions of the supplier Nova Fitness it must be mounted horizontally with the fan at the bottom. We are also terribly disappointed if that is the cause. That would mean that we would have to assemble all the boxes in which we assembled the meter upside down with the lid up.
The SDS011 would also be very sensitive to ripple on the supply voltage and that places high demands on the adapter we want to use.
Does anny one have advise for us how to deal with this problems? Tanks in advance.
Greetings Piet van Schijndel

From the specs I understand vertical mounting is also permitted, but then I experience the same fan noise issues…(our sensors are mounted as described in the top right hand example). 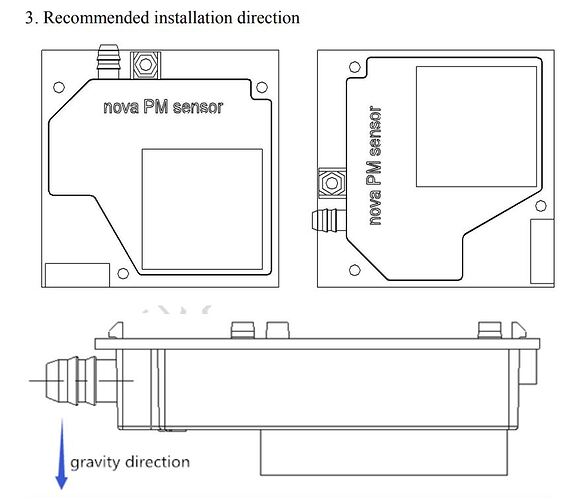 Top right is also how the SDS is mounted if you use a Nettigo kit.

I would ask please how have you come to this conclusion?

I don’t think this takes into account the the counting efficiency of the light scattering system for the different flow rates and/ or any different sampling efficiencies of the inlet into the chamber. So I think one needs to be careful when making changes as it could lead to under or over estimation of the particle concentration. That said if you are just looking for changes in concentration then as long as everything is consistent then it perhaps doesn’t matter but it could mean your data would be at variance from the rest of the sensor community.

I recently tested a SDS 011 with 2 different flow rates, one roughly twice the other (-140 Pa vs. -70 Pa), pressures measured at the output side of the SDS 011, see experimental setup: the green box is a variable suction device, the tube in water measures the negative pressure, the grey box houses the SDS011 and the laptop registers measurements every second. I do not know how the pressures relate to flow rates (roughly linear?). 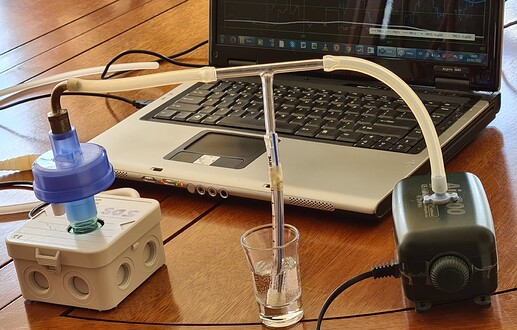 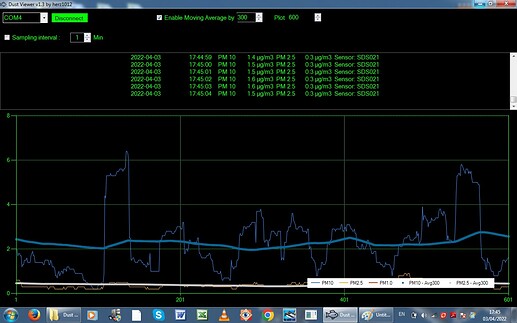 variable ventilation 7 low to high1280×800 202 KB
The next registration starts with high flow, followed by low flow after 5 min.: 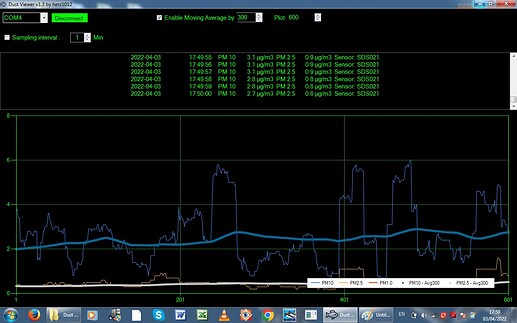 variable ventilation 8 high to low1280×800 206 KB
I cannot see significant changes in the values, especially in the moving average over 5 minutes (bold lines).
Interestingly enough, if the flow stops altogether, the measured values decrease to zero, so I guess the particles in the measuring chamber fall to the bottom of the chamber so they cannot be detected? (see last registration). 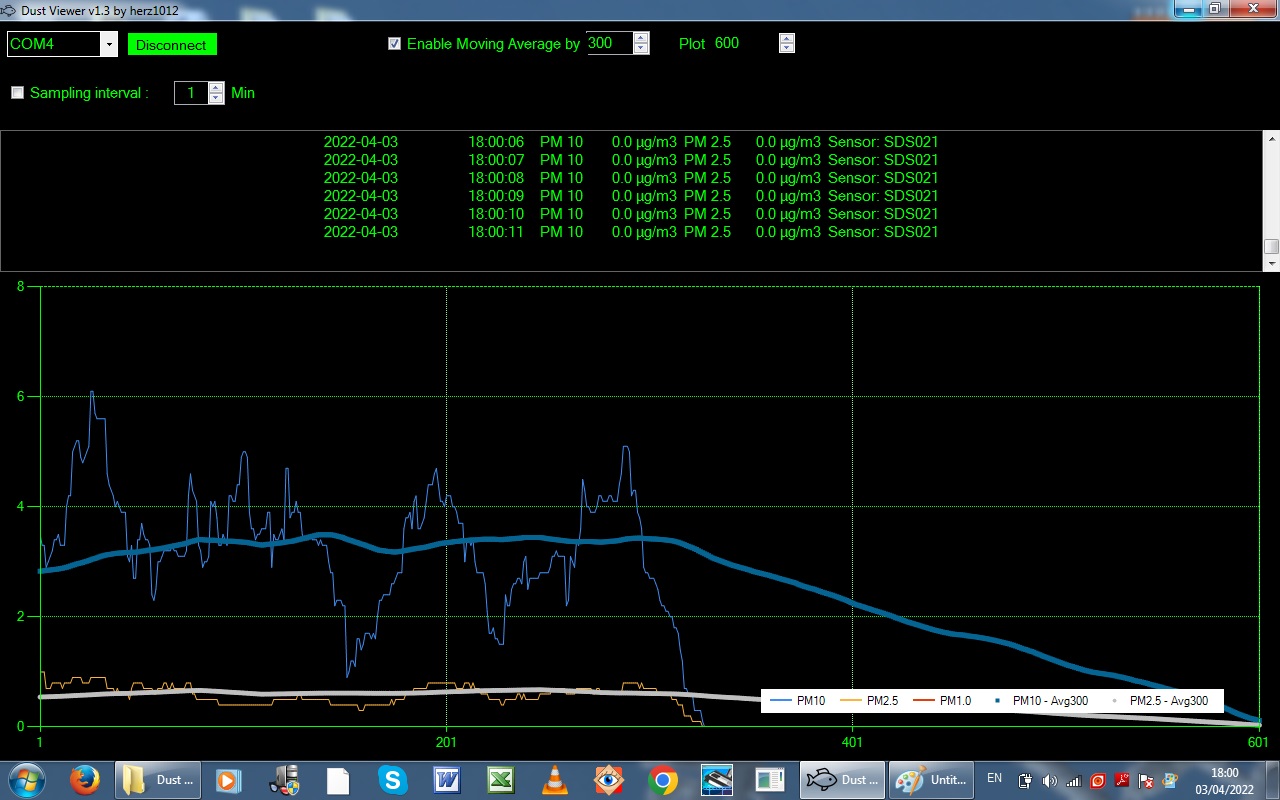