Currently you can configure in the node that it should use a secure (HTTPS) connection. I think we’re applying the wrong kind of security there, without really understanding what is actually secured this way. I would like to propose a better/improved way.

Have a look at the key concepts of computer security: 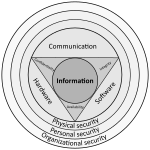 The CIA triad of confidentiality, integrity, and availability is at the heart of information security. (The members of the classic InfoSec triad—confidentiality, integrity, and availability—are interchangeably referred to in the literature as security attributes, properties, security goals, fundamental aspects, information criteria, critical information characteristics and basic building blocks.) However, debate continues about whether or not this CIA triad is sufficient to address rapidl The tri...

What the current scheme does not protect against, is spoofing node ids or even node data. Nodes are simply identified by their “unique” ESP-id, but people can make up their own ids, possibly ids can be duplicate (because you have no control over whether ESPs have duplicate ESP-ids) and people can make typing errors. Even though a node verifies that the server is authentic, there is no check the other way around, that node data is authentic. Data can even be spoofed if you know the hardware id of a node.

What would make sense to me, is that the server creates a node id plus some secret code. The user then puts those two credentials in their node. This way the server can verify that the node is authentic. If a node gets lost or stolen, the credentials can be retracted so the node can no longer send unauthorised data.

This could also solve the problem where the nodemcu dies and you get a discontinuity in your data (because the esp8266/nodemcu id changes when replacing it). In the proposed new way, you no longer use a hardware-id, but a server-side generated id. You simple throw the old nodemcu away and put the credentials in the new nodemcu.

Using this new method would require you always use HTTPS, to keep the id + secret code confidential.

As a way of transitioning, you could do something like this:

What do you think?